The sine curve is an example of a periodic function and it can be plotted on the complex plane or in the $xy$-plane. It is also called a sine wave or sinusoidal curve. The basic characteristic of this curve is that it repeats itself every $2\pi$ radians, or $360^\circ $. Sine curve can be used to determine velocity, acceleration, and displacement through the use of trigonometry. The graph below shows the curve $y=\sin x$:

One way to control the shape of a sinusoidal wave is to alter its amplitude. A wave’s amplitude is a number measuring how high it gets, and what determines its maximum height is the maximum value of its $y$-coordinate. The next question is: what happens if we increase the value of $a$?

The amplitude becomes $a$.

Another way to manipulate the shape of a sinusoidal wave is to change the period. The period of a trigonometry function is the extent to which the function runs through all possible values before reaching its original value and starting over again. What if we make the angle variable $(x)$ bigger by multiplying the angle variable with a number $(b)$?

The cosine graph is a sine graph shifted by $90$ degrees so that it corresponds to the cosine function. The cosine curve starts at $1$. 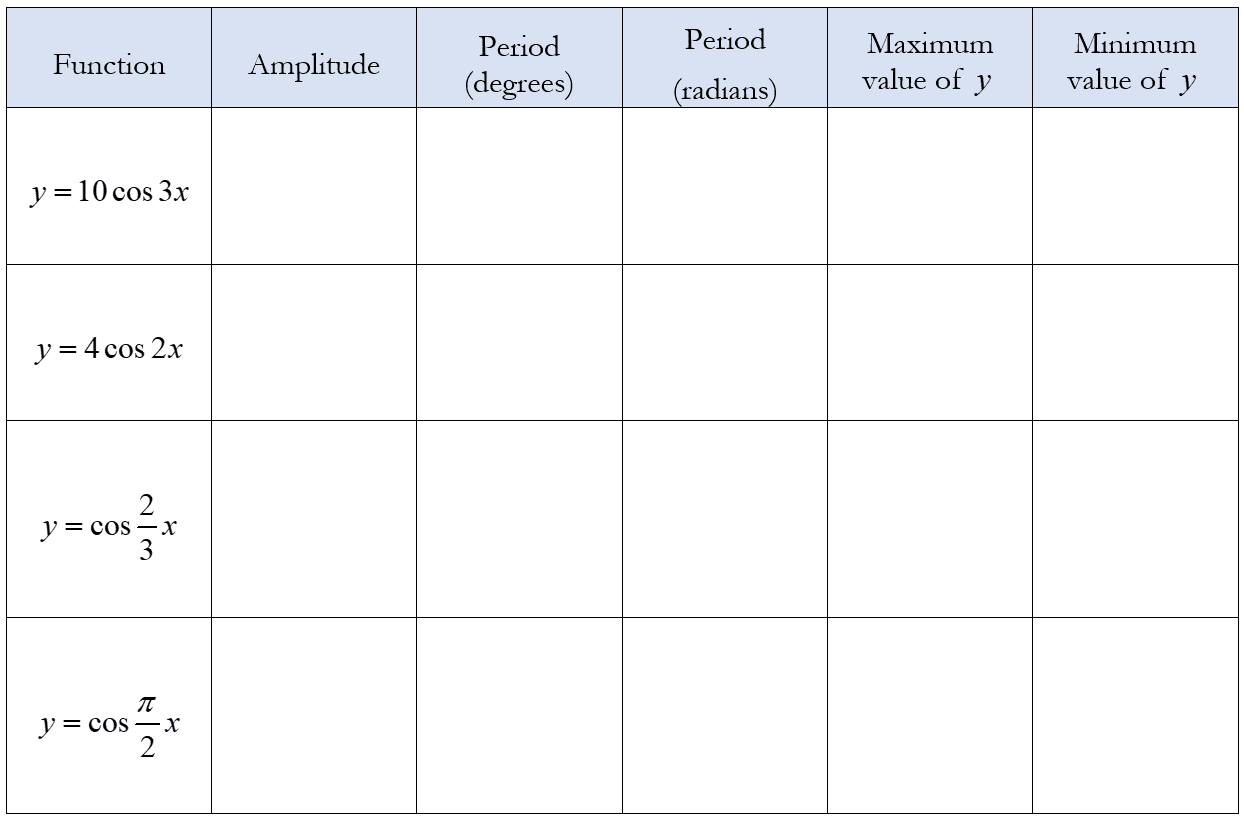 The graph below shows the cosine curve, $y=\cos x$.

Similarly, the height of the curve corresponds directly to the amplitude of a cosine curve.

Likewise, the frequency of the complete cycle in the period also increases correspondingly when we increase the variable $b$.

From the sine and cosine curves, we know that the graph of a trigonometric function has an amplitude. The tangent curve, however, has no amplitude because the function is undefined. There is a line in the graph where the curve will never touch – the asymptote. Since the function approach to infinity at the asymptote, there is no maximum or minimum value. 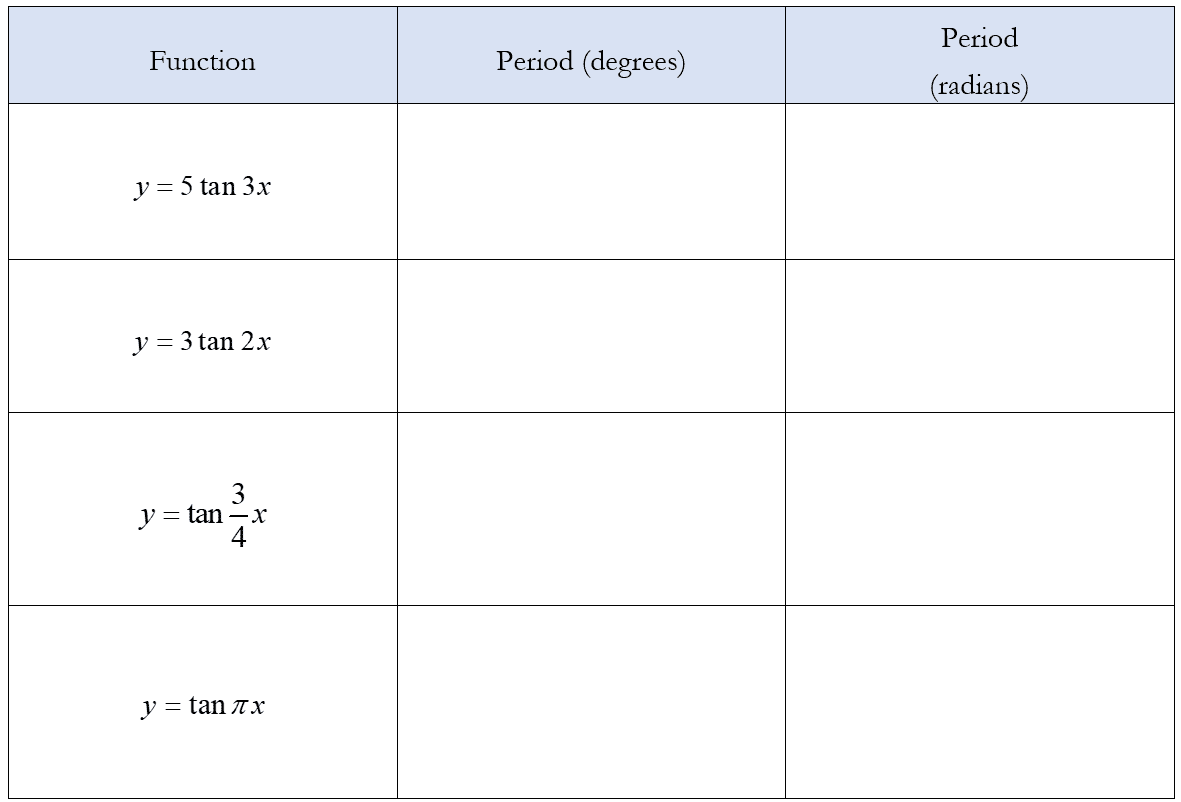 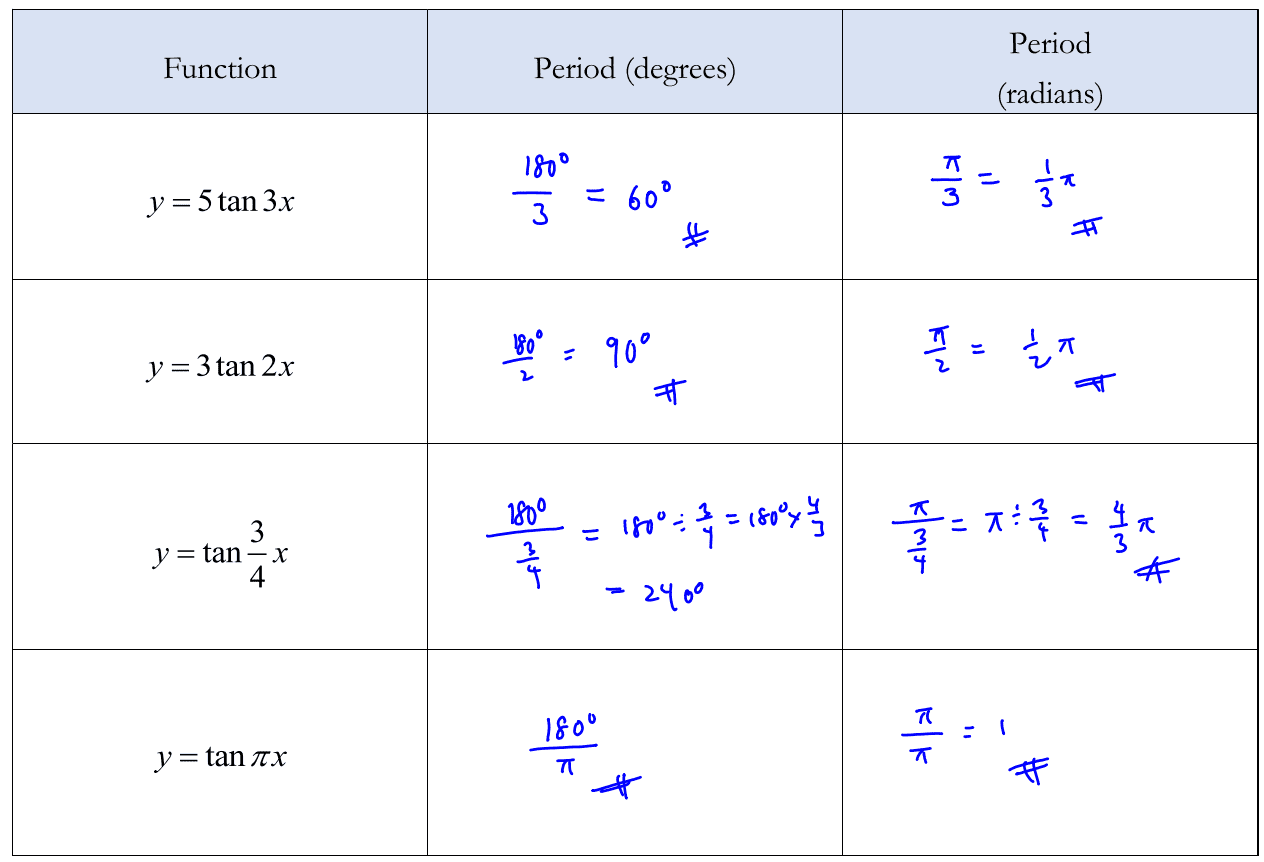 The graph below shows the tangent curve, $y=\tan x$.

Note: The period of the tangent curve is $\pi$ or $180^\circ $ which is different from that of the sine and cosine curve.

The sine and cosine curves can be translated in any of four directions: left, right, up, and down just like any other function. How do we identify the shift?

In this article, we will focus on the vertical translation:

Write down the maximum and minimum values of $y$.

(i) Write down the maximum and minimum values of $y$.

State the amplitude, the period and the range of the function.

(ii) State the amplitude, the period and the range of the function.

Hence, sketch the graph of $y$.

Sketch of Trigonometric Functions with $a<0$

From the previous section, we know that we can alter the shape of the sinusoidal curve by manipulating the amplitude. The amplitude of a curve is the distance from the center to either peak or trough. It can be positive or negative. Now, what if the amplitude of the graph becomes negative?

We could expect a change in the amplitude of the curve. The new graph has a negative amplitude. It does not go up from left to right; it goes down from left to right! In fact, it looks just like our original graph except that it’s reflected across the $x$-axis!

Techniques and Applications of Differentiation

Do sign up for our Free Mini-Courses and try our well-structured curriculum to see how it can help to maximize your learning in mathematics online.

You may also find the pricing and plans for our Additional Mathematics unlimited all-access courses here!

Techniques and Applications of Differentiation

With our online courses, you can learn at your own pace and take your time whenever it’s most convenient for you. Experience learning with us now for free!

Typically replies within an hour

I will be back soon

Hey there! How can we help you today?
Start Chat with: